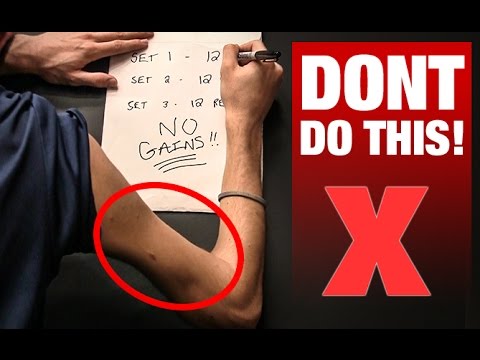 What’s up, guys? Jeff Cavaliere, ATHLEANX.com. We start this video with a pop quiz utilizing Jessie. Jessie is going to perform an incline dumbbell bench-press and you are going to watch and see if you can spot what Jessie does wrong. Jessie, the floor is yours. The bench is yours. No pressure. There’s only millions of people watching. Here we go. So now we’re going to do a set of 12 reps. The video title is “3 Sets of 12 Is Killing Your Gains”. Jessie is going to demonstrate how we kill our gains. What number is that, Jess? JESSIE: Six. JEFF: Six? Okay. For all intents and purposes, he’s looking solid right here. Now, the idea is for him to do the set to failure. He chose a weight here. What number is that? JESSIE: That’s 12. JEFF: 12. All right. Now, did you spot what Jessie did wrong? The first thing I can say is, he wasn’t quite at failure, but he was approaching failure. The more important point though was, if you took out a stop watch and you go back and you watch how fast Jessie did it, his tempo on that put him at about a 20 to 26 – I wasn’t really timing it specifically – but 20 to 26 second time for him to do that.

Maybe up to 30 seconds at most for him to do that. That tempo is not enough to illicit the hypertrophy that he’s looking for by doing that rep range in the first place. So let me explain where this is all coming from. When people came up with the magic number of 12 reps – 10 to 12 reps for hypertrophy – where that was really generated from was from studies that show that you’re ultimately, the place that you make the most gains, is when your time under tension eclipses 45 seconds and gets closer to 60 seconds for a given set. So if you were to do a rep with a tempo of either a second up and three seconds on the way down – prolonging the eccentric contraction, which is what we talk about a lot, even the Sore in Six Series – that’s four seconds per rep.

Times 12 is 48 seconds. It cross that threshold. Or if you did, maybe, a second up with a second pause at the top and a little two second down you’re still at 4 seconds. Or even a three second down. Now you’re at five seconds. Now you’re in the 60 second range. When you do this – what you just did – you now do the 12 reps, you do it to failure, but you do it at much too fast of a pace to get the benefit that you were going for.

Again, predicated off the fact that time under tension is what was driving the rep range, not the fact that the rep range was. So 3 sets of 12 is killing your gains because we become so fixated on 12. It becomes nothing about what actually led to the picking of 12 as the magic number, and it becomes all about the magic number. So now, if we fixate on 12 – and now I have to share a little bit of an embarrassing story for Jessie, but this is all so we can learn. When Jessie started training in here the first thing I did was watch him do his exercises. By the way, performance-wise Jessie’s technique on that was really good. He kept his elbows tucked here, he drove them up over his chest, he wasn’t protracting his shoulders; everything was good. But what we want to do is when we think about Jessie starting out training I’d just like to watch him and see what he does. As I watched him perform his first exercise in his workout he did his sets, he didn’t take any of them to failure, he was basically stopping a little bit short, and then he went on.

His third set, or fourth set looked a little harder, but then he went to his next exercise and he started off, on the very first set, he stopped way short of anything that looked like failure to me. That’s when I intervened and I think I remember “Jessie! What the-?!” No, I didn’t yell at the guy. I said “Jessie, what are you doing?! Keep going! Keep going!” And he said – what did you say? JESSIE: I said “Well, I’ve got two more sets left.” JEFF: So he said “But I have two more sets left.” The mentality that Jessie was thinking was “If I lay it all on the line here in this first set, how the hell am I going to get 12 reps in the second and third set? It’s not going to happen.

Especially not using the same weight.” And that is the death of the prescription of 3 sets of 12. If that’s how you look at it a lot of things go wrong. So let’s see some of the things that go wrong. If you take the 3 sets of 12 approach and you grab a weight, and you do what Jessie did and you say “If I can’t make it there, then I might have to do something to make sure that I do. So I might choose a weight that’s a little bit lighter to start. Then the next time I come around with a workout I’m not going to start with what I started with this time. I’m going to go with a little bit lighter weight so I know I have a little bit of energy left to get through all three sets.” Or you’ll do what I kind of saw you doing, too. Let’s demonstrate. He gets up here, he starts doing his first rep.

JEFF: All right, so what do you do? Instinctively. JESSIE: I go half. JEFF: Let’s see. See? He cuts the rep short. We do this all the time. We start going “Shit! The only way I can get to 12 is if I abbreviate a few of the reps in the middle. Okay now I’m at 10, 11. I think I can get the last three full reps.” But what did you do? You just basically sacrificed all of your reps in the beginning and into the middle and maybe even at the end.

Here’s why: the four reps that you did in the beginning, they’re not the same as full reps performed when you’ve already reached fatigue. They are basically thrown away. The reps that you did in the middle to get all the way to the end there, those half reps, they were wasted reps because they weren’t even full reps. Then when you get up to the very end, those final, few reps are different in that stage than they would be had you done all full reps up to that point. So you really didn’t get any of the productive reps that you were looking for. So that whole set became kind of waste. So what you want to do instead is, if you need to drop the weight on a subsequent set, drop the weight and then go back and start doing the reps again to failure, where you’re going to fail on that rep range of 10, or 12.

But more importantly, if you’ve set out with a weight that you do 12, or 11 and you go all the way to failure, you take it all the way to failure; you can’t do anymore. You lower down, lower down, you can barely control it and you put the weights down. If you’ve got 11 reps, so what? Good! If you got 10, great! If you got 9, good! You’re running down that range where you’re now looking at that time under tension and you’re coming in a little bit short. It depends on how long you delayed the reps, but you should be more focused on the time and falling into that time failure range than you are about a specific number. The point is, only you know the effort that you’re putting into a set. I can see a lot, and I can see when people are cheating through a rep a lot, but I can never ultimately tell what you feel like inside. Only you know what you’re feeling, and only you know how much effort you’re exerting, and only you are going to be the person that holds yourself accountable, ultimately, to the effort you’ve put forth in the gym.

If you just focus on a number and you train to a number you might be leaving a lot of gains on the table. If instead you focus on effort and what you’re giving in that rep range, and the idea being that the focus you have at the moment is hypertrophy – because you could be training for strength. That’s a whole different argument. The fact is, just make sure that you’re giving your best, no matter what you’re doing and you’re not cheating yourself in the sake of hoping that no one else is watching. Because I’m watching. I’m watching from afar. Somewhere, some way. Jessie thinks I’m the only one watching. I’m watching all of you when you do your reps. At least, you should be hearing me in your head when you’re doing them. All right, guys.

If you’re looking for a training program that doesn’t take shortcuts – I expect hard work, but I guarantee good results by doing it – head to ATHLEANX.com and get our ATHLEANX training program. In the meantime, if you’ve found this video helpful, or maybe even eye opening – because we all do it. I’ve done it plenty of times. Believe me. Make sure and leave your comments and thumbs up below and let me know what else I can cover here on this channel that will be useful to you, and I’ll make sure I do that. All right, guys. I’ll see you soon. .