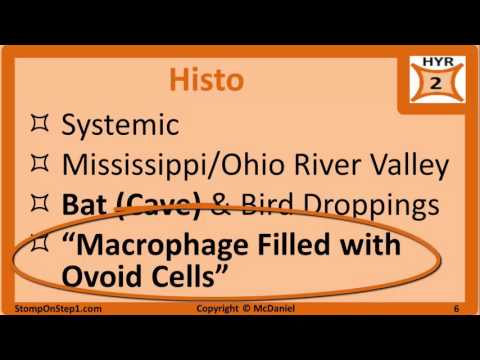 Distinguished future physicians welcome to Stomp on Step 1 the only free videos series that helps you study more efficiently by focusing on the highest yield material. I’m Brian McDaniel and I will be your guide on this journey through Fungi. This is the 1st video in my playlist covering all of Microbiology for the USMLE Step 1 Medical Board Exam. We are going to review Opportunistic Mycoses, Systemic Mycoses, Superficial Fungal infections and Antifungal medications. This info isn’t very high yield for the exam, but I want to give us a little bit of a foundation to build on. Fungi are a group of eukaryotic organisms that present as either a unicellular organism (Yeast) or a multicellular organism (Mold).

They are nearly everywhere in nature, but only a small percentage can cause disease in humans. Most of the infections that occur are asymptomatic or so mild that that are not detected. Many of the pathogenic Fungi are dimorphic, meaning that they are present in the form of a mold in colder temperatures and present in the form of yeast at warmer temperatures (such as body temperature after infecting a human). A way to remember this is the mnemonic “Mold in the Cold, Yeast in the Heat.” Fungi have a complex reproductive life cycle that includes formation of Spores which can live in the environment in a vegetative state.

Humans usually contract fungal infections by acquiring these spores from environmental sources such as soil. Most fungal infections do not have a person to person spread. Mold form hyphae while Yeast form budding yeast and psuedohyphae. Both hyphae and Psuedohyphae are branching filamentous vegetative structures of fungi and each form spores. True hyphae have septae or cell walls between sections while psuedohyphae are formed by budding without a true cell wall/septae between sections.

The high yield fungal infections can primarily be broken down into two groups, Systemic and Opportunistic. Fungi in the systemic category have a higher virulence and can infect health individuals. While these fungi can infect immunocompetent individuals the infections are usually mild and localized to the respiratory system. In immunocompromised individuals the infections can more commonly spread from the lungs and disseminate to the rest of the body. Systemic fungi are found in specific geographic regions so when a question stem mentions a specific state that should be a buzzword to consider these fungi. Opportunistic Fungi are lower virulence and have to “wait for the right opportunity” to infect a host. Opportunistic infections usually only occur in immunocompromised patients such as those with AIDs, transplanted organs or cancer. For both systemic and Opportunistic Mycoses infections the route of infections is most often inhalation of a spore from an environmental source.

This first leads to a respiratory infection, and then given the right circumstances the infection may then spread to other parts of the body. Candida is the exception as it is normal skin flora. We all have Candida present on our skin and it only causes a problem when factors lead to an overgrowth of the fungi. The highest yield systemic mycoses are histoplasmosis, blastomycosis & Coccidioidomycosis. The highest yield Opportunistic Mycoses are Candida, aspergillus, cryptococcus, mucormycosis & Pneumocystis Jiirovecii.

For the most part, these different fungal infections cannot be differentiated based only on the signs and symptoms. Most of the fungi present like pneumonia with vague flu like symptoms. Therefore, the different fungi are primarily differentiated based on histologic examination of the sputum, biopsy or swab. A stain such as PAS or silver stain is usually needed to visualize the fungi. You should be able to identify the histology of each fungus via a pictures and a text description of the findings as you can be presented with either in the question.

Coccidioidomycosis is one of the Systemic Mycoses. I give it a high yield rating of 3. If you would like to learn more about that rating system please go to my website. Coccidio tends to be found in the southwestern part of the US. Question stems for Coccidioidomycosis may also mention a recent earthquake or an occupation such as construction which can help spread spores from soil into the air. Appears as “Spherule full of endospores” on sputum culture. Here you can see the larger spherule with the smaller endospores inside of it. Eventually the spherule will rupture releasing the smaller endospores. Histoplasmosis is another Systemic Mycoses. It is found primarily in the Mississippi and Ohio River Valley. Histoplasmosis questions may make mention of the patient being in caves or cleaning bird cages as it can be found in sole contaminated with bat or bird droppings.

On histology you find “macrophages filled with many ovoid cells” since this fungi is intracellular. Here is a picture of that histology, which could be better but I’m limited by copyrights with what pictures I can show you. If you want better pictures just google it Blastomycosis is also a Systemic Mycoses. It is found east of the Mississippi River and is often associated with exposure to bodies of water like ponds and riverbanks. Histologically it appears as a large yeast with “Broad Based Budding” which you can remember with the mnemonic “All Bs” for blastomycosis, broad, based and budding. Here are a couple pictures of that histology. Here is a map I made that shows roughly where you can get the different systemic infections in the United States. You have coccidio in the southwest. Histo in the eastern part of the country from the Mississippi River over to the coast. And Blasto is sort of in the middle of the country around the Mississippi and Ohio rivers. Note that there is an overlap between Histoplasmosis and Blastomycosis.

Cryptococcus Neoformans is an opportunistic mycoses infection associated with exposure to pigeon droppings. Following inhalation and infection of the respiratory system, Cryptococcus has a predilection for spreading to the meninges and causing Meningitis. Cryptococcus is monomorphic and not present as a mold. Its main virulence factor is an antiphagocytic polysaccharide capsule which can be seen with India Ink stain. Histologically it appears as singular budding yeast with a “halo.” Here is just a gram stain so you can’t see the capsule. Here is a picture of india ink staining where you can see the capsule halo Aspergillus Fumigatus is an Opportunistic Mycoses with a number of different high yield presentations.

Allergic Bronchopulmonary Aspergillosis is when the fungus colonizes the airway of patients with CF or asthma leading to a hypersensitivity reaction. It presents with asthma like symptoms and migratory pulmonary infiltrates. It can be identified with an aspergillus skin test. An Aspergilloma (AKA “Fungus Ball”) is when the fungus fills up a cavitary lung lesions previously formed by a TB infection or other lung injury. Here is a picture of a fungus ball filling up a cavity in the lung Aspergillus is also associated with hepatocellular carcinoma as the fungus produces a carcinogenic Aflatoxin. Histologically aspergillus presents with “V-shaped” hyphae branching at acute angle Here is a picture of the branching hyphae with acute angle of roughly 45 degrees or less Pneumocystis Jiroveci is an opportunistic infection that primarily presents as Pneumocystis Pneumonia (PCP) in patients with AIDs. PCP usually has diffuse bilateral interstitial infiltrates in patients with CD4 T Cell counts below 200. Once counts are below 200 AIDs patients should be given Trimethoprim/Sulfamethoxazole prophylaxis to prevent PCP. Previously known as Pneumocystis Carinii. Mucormycosis & Rhizopus (AKA Zygomycosis) are opportunistic mycoses that are usually seen in diabetics (most often during ketoacidosis). It results in an infection of paranasal sinuses or the eye that can extend into the brain. The fungi infect the vessels and can form a clot leading to a necrotic black eschar. Histologically it has “ribbon like” hyphae without septae branching at a wide angle (about 90 degree).

Here are a couple examples And here is one more example where you can see the ribbon like hyphae without septae We have already discussed the more serious fungal infections which can spread through the body. Now we will move onto the less serious infections which are localized to the skin, mouth and/or vagina. Tineae is a group of common fungal infections that are primarily localized to the skin, hair and/or nails. Dermatophytes cause Tinea Corporis (AKA Ringworm), Tinea Pedis (AKA Atheletes Foot), Tinea Capitis (a superficial scalp infection) & Tinea Unguium (infection of the nails). Scrapes of these superficial fungal infections can be shown on KOH prep to have a “spaghetti and meatball” pattern of hyphae and yeast balls. Athlete’s foot is a scaly pruritic erythematous lesion of the feet most common in young adults. Ringworm usually presents as a scaly erythematous circular lesion with central clearing.

Tinea Capitus is a scaly area on the scalp which may have localized alopecia (or hair loss). Infections of the nails (AKA Onchomychosis) are more commonly in elderly individuals, are very tough to treat and present with thickened opacified nails. Tinea Versicolor is caused my Malassezia Furfur and leads to well demarcated areas of hyperpigmentation or hypopigmentation. It is more common in young adults especially in hot weather and occurs on the trunk more than other regions. Candida is part of normal skin flora and the most common cause of fungal infection worldwide. It is an opportunistic infection that most often effects the vagina (AKA “Yeast Infection”), mouth/tongue (AKA “Thrush”), and genital area (AKA “Diaper Rash”). However, it can also occur in the esophagus (particularly in HIV patients), between skin folds (primarily in the obese), and heart valve (IV drug users). Infections can arise soon after antibiotic treatment as the removal of “good” bacteria allows for overgrowth of the fungal flora. Histologically it presents with oval budding yeast and psuedohyphae. It forms germ tubes (true hyphae) when incubated at 37 degree Celsius for a few hours.

And I also have a picture of oral thrush here. I’m going to do an entire video on vulvovaginal infections so I will save the details of that type of candida infection for that video. Sporotrichosis is seen when spores on a thorn get introduced under the skin by a thorn prick. Question stems usually mention a rose gardener. In immunocompetent individuals it causes a localized subcutaneous nodule and/or an ulcer at the site of skin breakage. That brings us to the antifungal medications. The Azoles (Fluconazole/Diflucan, Ketoconazole, Miconazole, Itraconazole …) inhibit the cytochrome P450 Lanosterol 14 Alpha Demethylase enzyme which is necessary to convert Lanosterol into ergosterol. Ergosterol is important for fungal function as it acts in the cell membrane similar to cholesterol in our cells. Mutations that encode for the enzyme can prevent the drug from binding to the enzyme and lead to drug resistance.

This class of drugs has a wide range of antifungal uses, from serious to mild. Some are even available over the counter. Amphotericin B & Nystatin bind to ergosterol in fungal cell membranes creating pores. Nystatin is most commonly used in the form of “Swish and Swallow” mouthwash for thrush. Amphotericin B is used only for serious systemic fungal infections or fungal meningitis due to its severe side effects. Soon after it is administered Ampho B can cause fever, chills & hypotension (AKA “Shake and Bake”).

The drug is also nephrotoxic. .