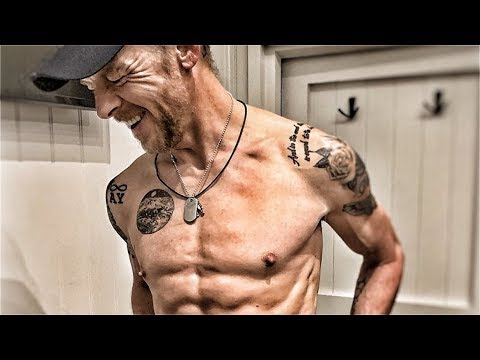 You might not recognize British actor and comedian Simon Pegg these days. Apparently, he’s been hitting the gym hard the last several months in preparation for his role in the upcoming indie drama Inheritance — and he recently revealed a dramatic new change to his appearance. Here’s how he pulled it off. “So, what’s the plan?” … Right.” According to Pegg’s trainer, the process of getting him in shape for his new film took six months. Consistency is key when it comes to reaching fitness goals, and although to fans it might seem like Pegg’s transformation happened overnight, the change actually took day after day of putting in the work and doing the small things right. Pegg’s strong fitness base certainly helped, too. Pegg has been working with trainer Nick Lower for several years, so when he started his Inheritance workout program, his body was prepared. He had a good strength base built up, he was used to disciplining himself, and he was familiar with the process of working with a trainer toward an end goal. That helped him reach his current level of fitness after six months of work.

Part of Pegg’s training program was running 37 miles on the trails every week. Running is a good way to lose weight and get healthy, but trail running might be even better — according to the website Core Running, it’s a good functional workout because the uneven terrain improves your balance. In other words, just going for a jog on flat ground will tone your leg muscles and improve your cardiovascular health, but it might not get you in shape for other activities. Trail running can help you and your body be ready for anything maybe even doing stunts on a film set. And if muscle definition is your main goal, trail running doesn’t exclude that either: Running downhill puts four to five times your body weight on your legs, so it increases your strength by leaps and bounds.

Thanks to his weekly trail runs, not only do Pegg’s muscles look good now, but he’s also probably fast, agile, and ready for action. Pegg’s workouts included a mix of strength work, circuits, and core conditioning. Circuit training is a high-intensity type of workout where you cycle through strength and endurance moves, and it works because it combines cardio and resistance training, helping burn fat, build muscle, and increase overall endurance. Pegg’s trainer had him doing circuit workouts years ago when Pegg was preparing for Mission: Impossible. In one video, Pegg referred to circuit training as “Torture Tuesday.” Pegg would perform each planned exercise for 30 seconds, rest for 15 seconds, and then do it again, until he’d completed the entire workout three times. There’s no word on the exact contents of Pegg’s circuits for Inheritance, but it was probably doing something pretty similar.

And it’s not difficult to tell that Pegg focused on strength work and core conditioning, too. According to trainer Nick Lower, Inheritance required Pegg to be “very lean” and to have a “specific body shape,” and it seems like Pegg ticked most of the boxes here as he worked out. He did plenty of strength training and resistance work, he followed a good nutrition program, and it’s evident from Lower‘s careful statistics about Pegg’s journey that he kept careful track of Pegg’s workouts. After all, recording the journey is the best way to enjoy the end result. Maintaining a positive attitude during exercise is important, but it isn’t always easy.

Pegg did admit to “occasional mild grumpiness” on Twitter, but with the kind of grueling workout schedule he followed, who wouldn’t have their ups and downs? “It’s entirely possible to be relaxed and extremely uneasy at the same time. “No it’s not.” “You do it all the time!” “No I don’t.” “Yes you do.” This does bring up an interesting point about how important mindset is when it comes to fitness.

An Elite Daily article cites a scientific study suggesting that positive thinking can actually have a tangible impact on your workout results. So while Pegg might have been grumpy about the occasional early-morning trail run or punishing “Torture Tuesday” circuit, we’re guessing that most of the time, he kept smiling. He might not have made as much progress if he hadn’t.

Eating clean is another area where Pegg has extensive experience. While preparing for Mission: Impossible, Pegg followed a strict diet program with the help of Tom Cruise’s personal chef. How did Pegg’s Inheritance diet compare to his Mission: Impossible meals? We can’t say for sure, because his fitness goals for this latest film are different. But when it comes to getting lean, nutrition is half the battle, and Pegg certainly put in his time in the kitchen as well as the gym. Pegg has encouraging words coming in from all sides. Each day in the gym, his trainer helps motivate him and get him into action. His mom is one of his biggest supporters, too on Lower‘s Instagram photo, she commented: “Amazing Nick so proud of Simon and you for the plan and support.” His fans are definitely on board, too. When Lower posted the photo of Pegg’s transformation, his notifications were flooded with good vibes.

Much like the power of positive thinking, support from the people around you is instrumental in reaching any goal, fitness-related or otherwise. With Pegg’s recent transformation, he’s definitely feeling the love. We can’t wait to see the true fruits of his labor when Inheritance arrives. “How’s that for a slice of fried gold? Check out one of our newest videos right here! Plus, even more Looper videos about your favorite stuff are coming soon. Subscribe to our YouTube channel and hit the bell so you don’t miss a single one.